Add this event to your calendar

how can we make them even simpler?

If you use Twitter, mention @microformats dinner' in tweets about the event, and track them on Twitter Search.

Add yourself alphabetically sorted by family name if you plan on attending or attended this event.

Notes and thoughts on a "microformats 2.0" by Tantek Çelik as proposed, discussed and iterated during FOOEast 2010-05-02.

2004: In early February microformats were introduced as a concept at eTech, and in September hCard 1.0 and hCalendar 1.0 were proposed at FOO Camp.

How can we make it easier for authors to publish microformats?

requires 2 elements (nested, with perhaps at least one being pre-existing), and 2 class names

Web authors/designers are used to the simplicity of most HTML tags, e.g. to mark up a heading:

How can we make microformats just as easy?

requiring only 1 class name for the simplest case.

Can we do even better?

One of the most common questions asked about hCard is:

Why does hCard use vcard as the root class name?

This slight inconsistency between the name of the format and the name of the root class name consistently causes confusion in a large percentage of newcomers to microformats.

Though in microformats we believe very strongly in the principles of Reuse, we have to admit that in this case experience/evidence has shown that this may be a case where we re-used something too far beyond it's original meaning. Thus:

Proposal: use root class name "hcard" instead of "vcard" for future hCards.

This would result in:

making the simple case even simpler:

It's very important for the simple case to be as simple as possible, to enable the maximum number of people to get started with minimum effort.

E.g. to add any addition information about a person, add explicit property names.

How does this simple root-only case work?

What more can we simplify about microformats?

Numerous individuals have provided the feedback that whenever there is more than one level of hierarchy in a microformat, many (most?) developers get confused - in particular Kavi Goel of Google / Rich Snippets provided this feedback at a microformats dinner. Thus depending on multiple levels of hierarchy is likely resulting in a loss of authorability, perhaps even accuracy as confusion undoubtedly leads to more errors. Thus:

Proposal: simplify all microformats to flat sets of properties.

For example for hCard this would mean the following specific changes to keep relevant functionality:

This has meant that whenever a new microformat is drafted/specificied/adopted, parsers need to updated to handle it correctly, at a minimum to parse them when inside other microformats and avoid errantly implying properties from one to the other (containment, mfo-examples problem).

I think there is a fairly simple solution to #1 and #2 from the above list, and we can make progress towards minimizing #3. In short:

Proposal: a set of naming conventions for microformat root class names and properties that make it obvious when:

If it turns out we need a new property type in the future, we can use one of the remaining single-letter-prefixes to add it to microformats 2.0. This would require updating of parsers of course, but in practice the number of different types of properties has grown very slowly, and we know from other schema/programming languages that there's always some small limited number of scalar/atomic property types that you need, and using those you can create compound types/objects that represent richer / more complicated types of data.

This has numerous advantages:

with a hyperlink to Chris's URL:

microformats 2.0 is backwards compatible in that in permits content authors to markup with both old and new class names for compatibility with old tools.

Here is a simple example:

And the above hyperlinked example with both sets of class names:

Proprietary extensions to formats have typically been shortlived experimental failures with one big recent exception.

Proprietary or experimental CSS3 property implementations have been very successful.

There has been much use of border radius properties and animations/transitions which use CSS properties with vendor-specific prefixes like:

Note that these are merely string prefixes, not bound to any URL, and thus not namespaces in any practical sense of the word. This is quite an important distinction, as avoiding the need to bind to a URL has made them easier to support and use.

This use of vendor specific CSS properties has in recent years allowed the larger web design/development/implementor communities to experiment and iterate on new CSS features while the features were being developed and standardized.

The benefits have been two-fold:

There have been times when specific sites have wanted to extend microformats beyond what the set of properties in the microformat, and currently lack any experimental way to do so - to try and see if a feature (or even a whole format) is interesting in the real world before bothering to pursue researching and walking it through the microformats process. Thus:

Need more tools and interfaces that:

discussed some existing like: H2VX converts hCard to vCard, hCalendar to iCalendar

how would we re-implement Live Clipboard today, making it easier for publishers and developers? 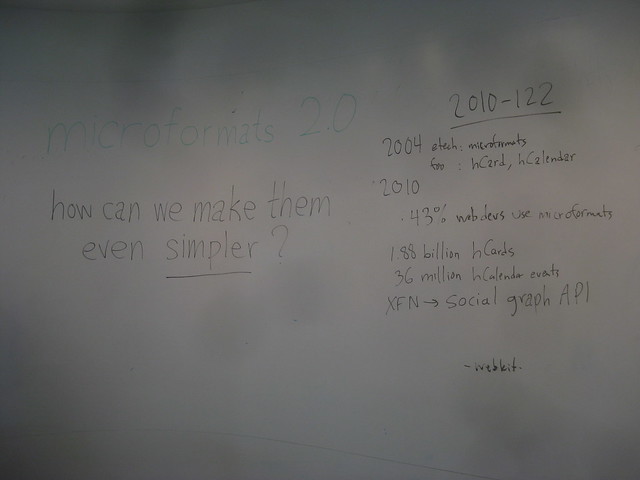 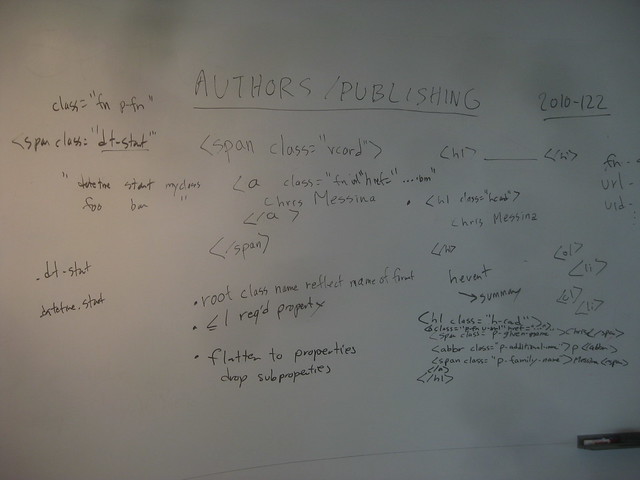 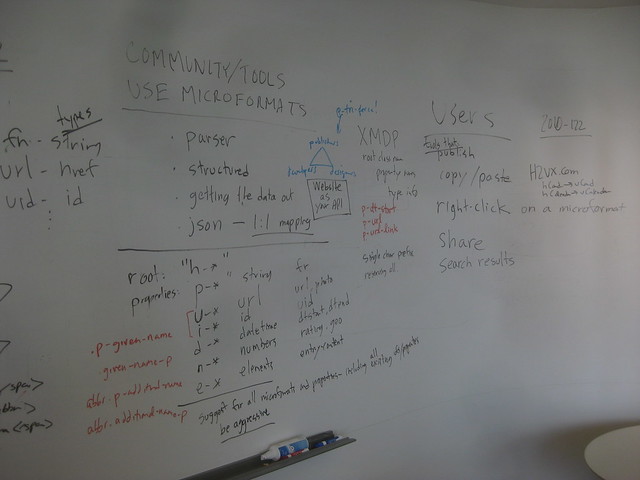 Articles and blog posts following up on the meetup. Add a link to your post in the list below: